Dispatches from Vittel Day 3 - Nestlé in Vittel – “It’s déjà vu all over again”!

It’s 6pm Tuesday evening in Contrexéville – a short drive from Vittel and the location of Nestlé’s second bottling plant in the area. I am sitting on a panel looking out at a room of 150 people, standing room only. The crowd is middle-aged and older – few if any younger people.  Local farmers, people working in neighbouring towns and retired people. 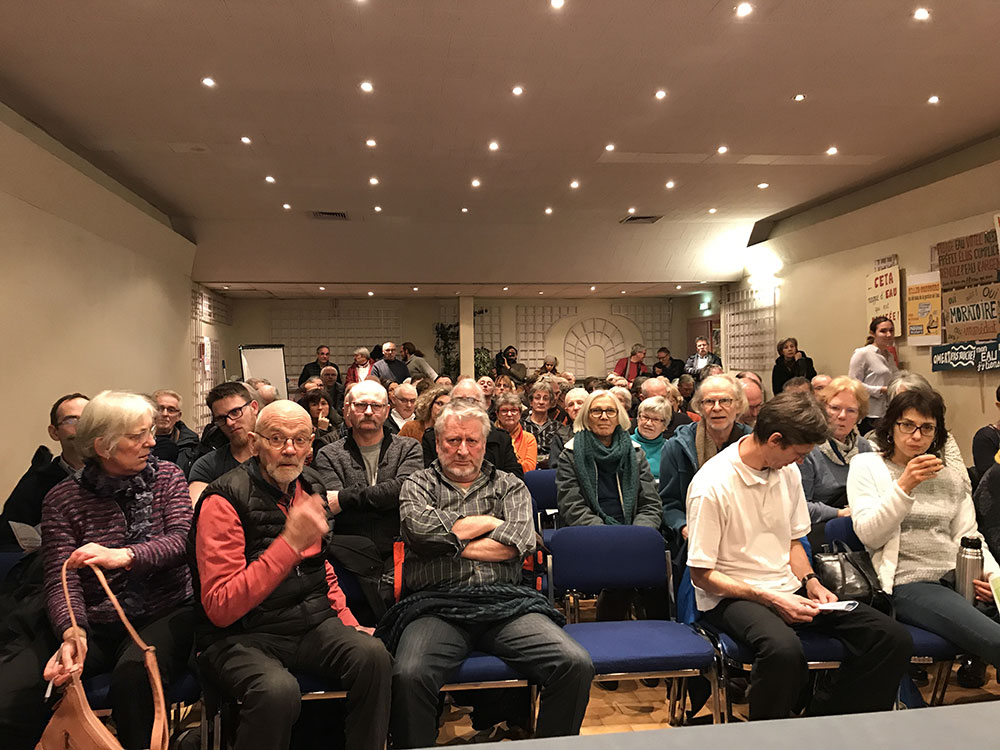 Sitting to my right are Dr. Susan Glasauer and Karen Rathwell from the Board of Directors of Wellington Water Watchers. To their right is Franklin Frederick, Brazilian water activist now located in Bern Switzerland. Jean Francois, President of Collectif Eau 88 is to Franklin’s right.  To my left is Bernhard Schmitt, another leader with Collectif Eau 88, who is chairing the meeting. To his left is his son Francois who in addition to being a singer and comedian is translating Karen’s and my presentation to audience. Susan Glasauer speaks French and sits between Karen and I – translating from French ‘on the fly’ - the presentations by other panel members and the comments of members of the audience.

There is one more thing to tell you to set the stage – as the evening discussion unfolds, in content and in emotional tenor – I can’t help but feeling like I am in a Save Our Water community meeting in the Elora Legion Hall! This is the ‘first’ of several “déjà vu’s” this evening.

Bernhard Schmitt opens the meeting. He introduces the Brazilian and Canadian guests to the audience and we are warmly welcomed.

Franklin makes opening remarks and summarizes the analysis of Nestlé’s global water strategy that I summarized in my previous dispatch. Franklin’s comprehensive presentation is peppered with anecdotes from his own experience with Nestlé in Brazil and Switzerland. There are audible gasps when he describes Nestlégate – the spying operation conducted against ATTAC and Franklin – the Swiss based grass roots group critical of Nestlé.

Franklin’s opening presentation is a full 20 minutes – and the audience is attentive and with him the entire time. This is déjà vu # 2. On January 17th, Elora residents listened with rapt attention for 30 minutes as Jan Beveridge presented highlights of an independent hydrogeological study and as lawyer David Donnelly presented in detail the legal strategy Centre Wellington Township can implement to stop Nestlé’s proposed Middlebrook well. People here in France  - as in Elora – care about their water and their community – and are prepared to organize to protect it.

Susan Glasauer introduced this animation (for which we had created French sub-titles) describing Nestlé’s operations in Wellington County and the Say No To Nestlé campaign. Francois read the sub-titles to the audience in a dramatic narration! Dr. Glasauer talked about recent research which makes it clear that it may take up to 100 years for the impact of current water taking to be fully evident – and at which time there may be no chance to remediate.

The rest of the evening was an invigorating back and forth between the audience and the members of the panel.

I was asked to address the question  “How do we make politicians respond to our demands?” I made a 2 minute presentation in English on ‘primary and secondary targets’ (See pg. 8,9 of Campaign Planning Manual) and then had the new experience of  room erupt in excitement in a delayed reaction to the translation.

This is déjà vu #3. People are eager to talk about the politics and strategy of social change. Too often I think people are only presented with technical details of ‘the problem’ and policy suggestions for ‘the solution’ without a real conversation about the strategy to create the politics that enables implementation of new and more just solutions.

After the meeting Bernhard Schmitt tells us this was their first community meeting where they talked about the politics of change and the moral and ethical questions posed by Nestlé’s predatory water taking. Bernhard felt in previous meetings they had only talked about the technical issues.

The evening therefore helped move the community to a new level of engagement and empowerment.  This is the last ‘déjà vu of the evening.

The meeting attracted widespread media. The Vittel story has been covered in recent months – but the occasion of international speakers drew the media back to the story. Der Spiegel – the German equivalent of Time magazine – did a 3 page story – published to coincide with our meeting. Multiple television and print media attended the meeting and have published stories this week. (I will attempt a short summary of media coverage in coming days).

This is the third of five special reports that Wellington Water Watchers will send in the next week from meetings in Switzerland and France. In these special reports I will share more about what I learn about the connections between Nestlé water taking in other communities around the world.

P.S. Nestlé Water Canada places ad in Wellington Advertiser that is a deliberate act of mis-direction

Nestlé Waters Canada bought an ad in the Wellington Advertiser in response to media stories that announced our trip to Vittel. The ad says in part  “We have invited the Wellington Water Watchers and Save Our Water…. to meet with us in a safe and open environment to discuss how we can work together to manage and protect the water resources.”

I was thinking of this as near the end of the evening meeting Franklin returned to the discussion of Nestlé’s links to the military. Franklin described the plan ATTAC (Swiss grass roots group) developed to hold a public “International Peoples Tribunal” in Switzerland on Nestlé’s global water strategy. Luciano Romero of Columbia was to be invited to present his testimony at the peoples’ tribunal. Luciano was a trade unionist and former employee of Nestlé’s Colombian subsidiary Cicolac.

Lucian Romero was murdered by paramilitaries in 2005 after Cicolac falsely branded him a guerilla fighter.

Franklin shared with the audience his concern that the person, who infiltrated the ATTAC group on behalf of Nestlé, shared this information in her surveillance reports. Franklin worried that this information contributed to Romero’s murder.

The experience of Franklin and the members of ATTAC who Nestlé spied upon, and the family and friends of Luciano Romero puts the lie to any notion that Nestlé is committed to “meet in a safe and public environment.”

P.P.S. - The European Center for Constitutional and Human Rights and the Colombian trade union Sinaltrainal filed a criminal complaint against Nestlé and its senior management alleging Nestlé was complicit in the murder. Switzerland’s prosecutor dismissed the case because it was filed after expiration of the statute of limitations. An appeal of this decision was subsequently rejected by Switzerland’s highest court. See https://www.ecchr.eu/fileadmin/Fallbeschreibungen/Case_Report_Nestle_Romero_2016_04_12_eng.pdf 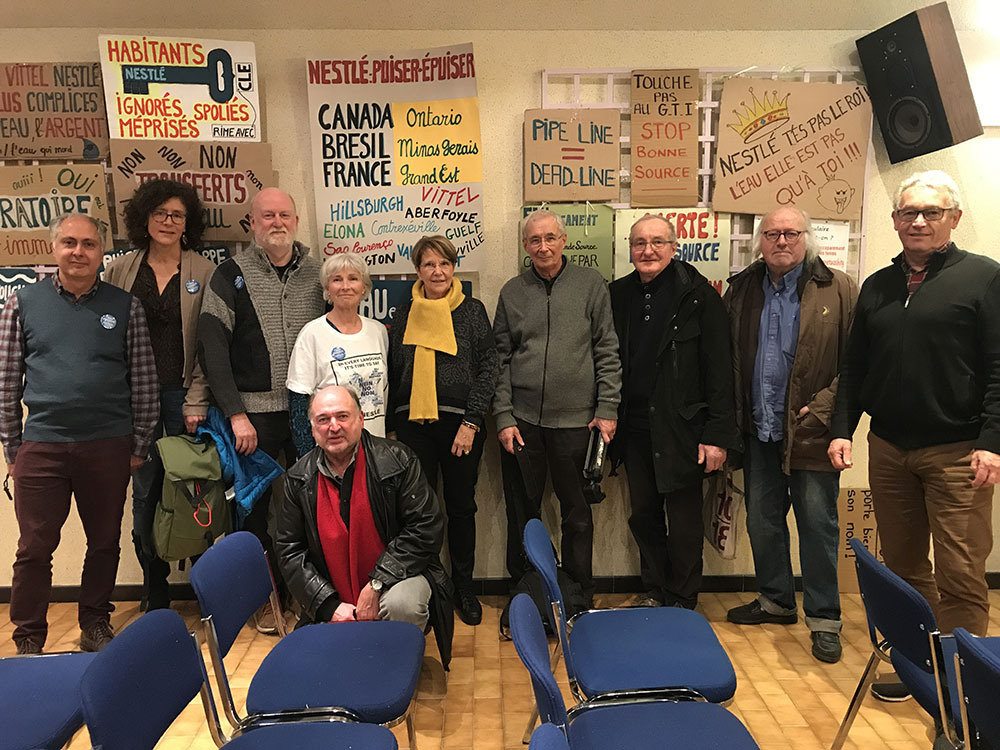